Why does a Chameleon changes its colour

Chameleon is a variety of lizard which often changes its colour to match with its surroundings. This is possible because of the colour-containing cells beneath the skin. The upper layer of a Chameleon’s skin is transparent but the layer just underneath it has cells containing yellow black and red pigments. These pigments are granular in structure and the granules can easily move from one point to another in its body. When these cells contract the concentration of granules increases at one point turing the colour of the skin into black. And when they get scattered throughout the body different colours are produced. 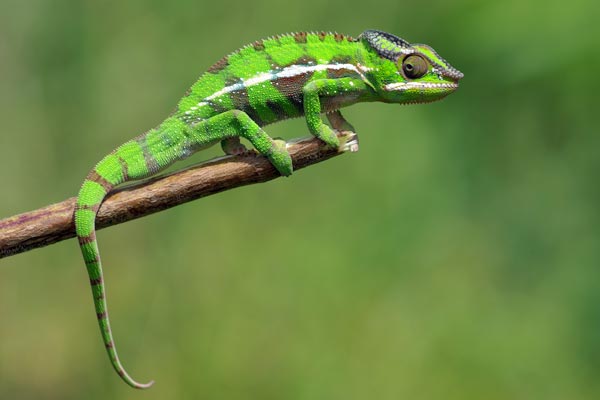 This implies that the contraction and expansion of its cells are responsible for change in the colour of its skin. The cells contract or expand due to several factors as described below:
1. First emotions play a role in changing its colour. When a Chameleon gets enraged or frightened its colour turns into black. Also in a state of excitement yellow spots appear on its skin making it yellow.
2. Secondly light brings a change in colour for exa. when exposed to the sunlight its cells turn black due to the heat of the sun.
3. Thirdly heat is also a contributory factor. When it is in a hot and dark atmosphere its colour becomes green and at lesser temperatures in darkness, the skin becomes light yellow.
The ability to change its colour provides the Chameleon with many advantages like protection from enemies and catching of insects for its food. Among the other traits of Chameleon the most remarkable one is that it can move one eye independently of the other. One eye can be looking forward while the other looks behind. This enables them to look at two things at a time and helps in cathing the insects on which they feed.